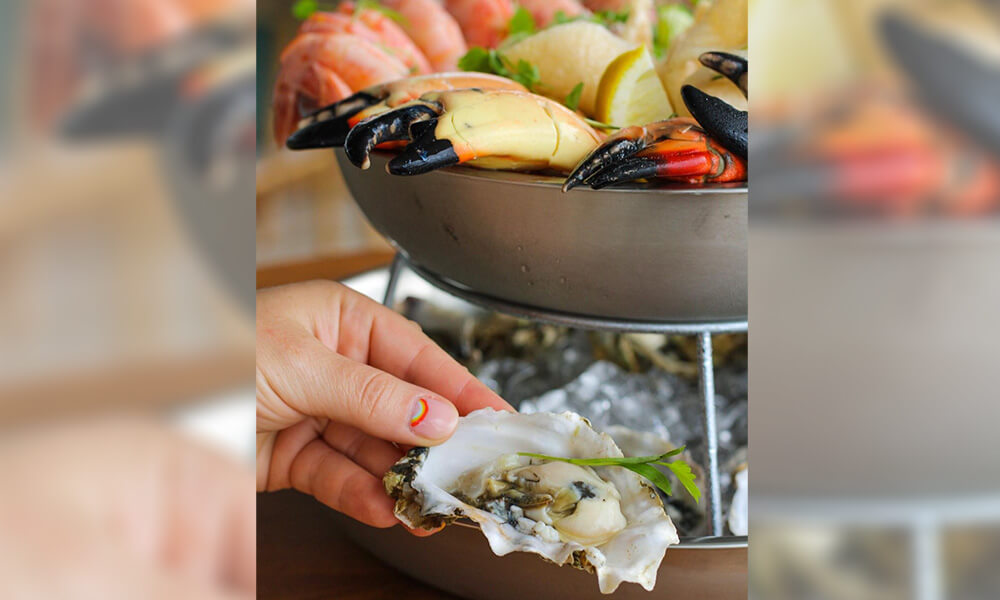 Comprehensive Guide To Types Of Oysters

Would you consider yourself a seafood person? Do you enjoy munching on all things from the sea? Or are you here only to learn about the best kind of oysters available?

Many people look at oysters as a single dish and do not realize that there are plenty of types of oysters out there, and they all have specific taste worth trying.

This blog will give you all the information you need on oyster varieties and explain what makes each one special.

So, wait no more and start reading our oyster flavor guide!

And, to try the best raw bar menu in Miami and the area, visit Bayshore Club. Our place will leave you speechless! Not only do we have the best-tasting oysters, but you’ll get to enjoy them with a beautiful waterfront view.

Some types of oysters are known under a few different names. That’s how Pacifics are also called Gigas, Japanese, or Miyagi oysters.

And those names say a lot.

Though they are native to Japan, these oysters are farmed on the Pacific coasts of the United States, as well. Also, they are exported and quite popular in other countries like the UK, Australia, and New Zealand. And the “Giga” in their scientific name is there to emphasize their size. Japanese oysters are pretty large, or “giant,” if you ask the person who named them.

They grow in cool water and usually vary between 3″ and 6″ in size. However, the larger specimens can grow up to 12″. But it takes about four years to reach this level of maturity.

But are Japanese oysters among the best-tasting oysters on the market? Well, their popularity allows us to say so. Many reports claim that Gigas are quite widespread worldwide, and most chefs would put them among the most popular oyster varieties on their menus.

The oyster flavor guides say that Pacific oysters have a sweet taste, with some creamy overtones and some earthiness. Their meat is smooth, and the flavor isn’t as briny as it may be with Atlantic or Eastern oysters.

Give them a try and see if that’s your new favorite seafood dish.

Most people would think we’re talking about a few different types of oysters. Still, in reality – Atlantic, American, Blue Points, Eastern, Wellfleets, and Totten Inlet Virginica are all one kind of seafood. Don’t get confused, and start differentiating oysters based on the flavor, not the name.

The Atlantic Oyster was first discovered in Maryland, specifically in a place called Chesapeake Bay. The name is quite suitable, considering it means “Great Shellfish Bay.”

You could find Atlantic Oysters similar in size to the Pacific type, but usually, they are a bit smaller. Eastern is one of the oyster varieties that grow fast and don’t need cold water to do so. Instead, they thrive somewhere between 60 and 70 degrees F in shallow coastal waters. Atlantic Oysters are native to the East Coast of the United States, but you can also find them in Northern Europe.

You’ll recognize Wellfleets by their purple streaks on their gray/brown or white shells and white flesh with a red margin.

They don’t have a sweet flavor like the Gigas, but if you prefer saltiness, these might be the best kind of oysters for your taste. Their meat is slightly crispy, and you’ll likely resemble the taste of mushrooms and seaweed.

The flavors of the sea are quite noticeable when consuming Atlantic oysters, and the area from which they were harvested plays an essential factor in the overall taste. That’s why this species has different names based on their origin. Blue points come from Long Island; you’ll find the Kumiai in Baja, California, and Cape Cod is home to Wellfleets.

Your safest bet is to visit all these places, try all the varieties, and then decide which are the best-tasting oysters.

Kumamoto Oysters are easy to recognize since they have an irregular shape you won’t see with other species. They are related to the Pacific kind but smaller in size. In fact, they usually only grow up to 2″.

Their shell is white-green, and quite hard to protect the meat inside, which is ivory-white, with a soft texture and a briny flavor.

Many consider this species to be the best kind of oysters out there, so these are labeled as Kumamotos, not to be confused with other Pacifics. If you’re a beginner, this might be the perfect option to start your seafood-eating journey.

Many newcomers opt for the Kumamotos since they are smaller in size and don’t have such a fishy flavor as some of the other kinds. Some more experienced seafood connoisseurs enjoy their fruity flavors and go for Kumamotos when searching for a sweeter oyster option.

Olympia oyster is another species native to North America. The common names of this kind of oyster usually hint at where the oysters were harvested. That’s how we have California Oysters and so on.

The confusion comes when trying to differentiate Ostrea lurida and Ostrea conchaphila. The two kinds are so similar, both in shape and size, that it’s very difficult to separate them.

The oval shape is what distinguishes the Olympia oysters from the rest in the bunch. Pear or tea-shaped oysters are what most consumers are used to (Pacifics), so Olympias stand out easily. Their shell is light purple or black in color and is usually quite shallow.

Still, this type of seafood is a delight to most guests. Olympia meat is ivory white and has a creamy texture. Though there isn’t much to consume, the flavor is quite present. Even from the smallest pieces, you’ll get a strong salty flavor. So, there’s much to enjoy.

Many seafood enthusiasts would put this species on the top of our oyster flavor guide, and we can understand why. Give Olympia Oysters a shot, and see if you’re one of the people who prefer this type of dinner.

If you’re in the Miami area and wish to try the best local seafood you can find, head to Bayshore Club. This place is located in Miami’s oldest neighborhood and has everything you’re looking for and more.

Of course, the tastiest seafood is there. But also, you’ll get to enjoy a beautiful waterfront view, perfect wine pairings, and the best customer service in the area.